Life on a planet of 9 billion 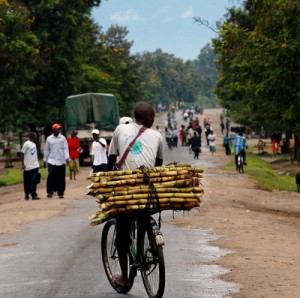 Is it possible for 9 billion people to live on this planet and enjoy a good standard of living? And on such a planet, is it possible for economies to grow, businesses to profit, and communities to prosper without undermining the natural systems that support all life? And without destroying some of the planet’s last great wildernesses?

At WWF, we believe the answer to these questions is simple: yes.

We believe this even though our own Living Planet Report shows so clearly just how humanity’s use of resources is affecting our planet. It does not make for cheerful reading. Since 1970, populations of species have declined by around half. Each year, we consume 50% more resources than the planet can replenish. We are no longer living off the planet’s interest, but eroding its capital. In doing so, we are not only plundering our own essential resource base but also destroying habitats, eroding biodiversity and impacting the crucial services nature provides to us, day after day, for free.

Our current trajectory towards a global population of 9 billion people by 2050 is straining our ability to provide for basic needs–clean water and air, food, energy and shelter. Consider that over the next 40 years, humanity will need to produce more food that it’s done in the last 8,000 years. Where will this food–and the water and energy, required to grow it–come from? Meeting the needs and aspirations of the next generations will be an increasing challenge. And with half of today’s population living on less than US$2.50 per day, this challenge is set against the imperative of many governments to reduce poverty and improve the living standards of their citizens.

Satisfying these imperatives is also likely to put increasing pressure on some of the most biodiverse and valuable wild places on the planet–the last ecological frontiers. Take Africa, for instance. The continent holds around 60% of the world’s unconverted arable land, and low-end estimates suggest it could harbour more than 30% of global mineral wealth. But much of this potential wealth overlaps areas rich in biodiversity and highly productive in ecosystem services. Similarly, more than half of all new oil and gas finds are in Africa, with many in areas of high ecological importance. When looking to satisfy our appetite for resources, and favouring equitable and sustainable development for all, how do we continue to protect these last ecological frontiers and maintain their vitality, productivity and connectivity?

Many of the tools we need to reconceptualise development in the 21st century are already at our disposal–they may need sharpening or to be better applied, but we have them. So, what needs to be done?

First, in their pursuit of sustainable long-term prosperity, governments and regional bodies must get better at integrated planning and transparent decision-making. To make sound decisions, they must be supported in evaluating the range of potential development options on offer. This also requires greater appreciation by decision-makers of the inherent non-financial values of ecologically important places. For example, WWF and the Natural Capital Project worked with Belize’s Coastal Zone Management Authority and Institute to develop alternative development scenarios for the country’s marine and coastal environments.

Second, policy and legal frameworks must empower and encourage civil society to be fully involved with decisions that affect their local environments. As we have seen in recent campaigns to protect Virunga National Park in the Democratic Republic of the Congo from oil exploitation, international civil society also has a role to play in amplifying the voices of local activists, facilitating access to information and championing their concerns to international stakeholders.

Finally, investors and financial institutions have a role to play as responsible stewards of capital. Investors, and the companies they entrust with their funds, define the frameworks in which development decisions are made. It is therefore crucial that investments are responsible, and that investors use their influence to hold companies accountable for respecting international treaties and commitments such as the OECD Guidelines for Multinational Enterprises and UNESCO World Heritage Convention.

WWF believes the world can create a future in which 9 billion people can thrive. This can be done without endangering natural systems and their vital services and while protecting our world’s most precious places and species. But to do so, we must work together to defend our last ecological frontiers. The OECD and member countries have a crucial role to play in this task. In this they have an ally in WWF.

Extreme poverty has been halved in a few decades and more than 600 million people have been brought out of poverty in China alone. Child mortality was also halved and children born today will reach 70 years of age on average. The enormous development progress over the past decades is one of the most significant achievements in human history and business and private investments have played an integral part.

Business and private investments under strong national leadership have been instrumental in all the greatest development success stories. Just think of Singapore, Korea, China, Ethiopia, Turkey and Rwanda. More and better business and investments will be crucial to eradicate extreme poverty by 2030 and implement the sustainable development goals to be agreed at the United Nations later this year. Only businesses can provide jobs for the around one million young Africans joining the labour market every month. Private investments are hugely important to green our agricultural systems and invest in clean energy for billions of people with little or no access to electricity. Private business is generally a huge force for good. But strong national leadership and responsible business conduct is necessary to avoid super-profits, exploitation of workers and degradation of the environment.

More of the $20 000 billion estimated to be invested around the world annually over the coming years must be directed to green investments in developing countries. Good investment policies are the most important thing. China now receives much more foreign direct investment in a single day than it did in the whole of 1980. Investments to Ethiopia have increased 15 times in just seven years as a result of good policies and focus on manufacturing, agriculture and energy. Development assistance can also help by reducing risk and mobilizing much more private investment. By blending public and private investments, the EU used $2billion in aid to mobilize around $40 billion for things like constructing electricity networks, financing major road projects and building water and sanitation infrastructure in recipient countries.

We also need better investments and better business conduct. Corporate super-profits, corruption and tax avoidance must be stopped. Far too often, profits are private while the destruction of forest, pollution of rivers and the effects of climate changing gasses are borne by the public. Workers must make decent wages, work in safe environments and have the right to join unions.

The OECD has developed the Guidelines for Multinational Enterprises, which set out recommendations on what constitutes responsible business conduct in areas such as employment and industrial relations, human rights, environment, information disclosure, combating bribery, consumer interests, science and technology, competition, and taxation.

Mechanisms are in place to deal with grievances and the Guidelines have had some great successes. The UK-based oil company Soco decided to halt oil exploration in Africa’s Virunga national park until UNESCO and the government of the Democratic Republic of Congo agree that oil production does not threaten the unique biodiversity in the area. G4S, a major global security guard employer, stood accused of underpaying and denying rights to employers in Malawi, Mozambique and Nepal while blacklisting union members. After mediation by a global union of 900 national unions, G4S agreed to improve employment standards across the company and to help improve the standards in the whole global security industry. The Norwegian salmon farming giant Cermaq stood accused of inadequately considering the environment and the human rights of indigenous people in Chile. The company agreed to enter into mutually beneficial agreements with indigenous peoples and to even further minimise risk of any environmental damage. The parties also agreed that certain claims about the company made by civil society groups were baseless and that future dialogue should start with mutual trust and clarification of facts, a win-win solution for both parties.

States must be responsible for framing the market in such a way that companies can make a healthy profit and provide jobs while protecting the environment and people’s rights. But companies can also be advocates for more responsible business conduct. The world moves forward when the best companies push others to improve social and environmental standards. Wilmar, the largest palm oil producer in Asia, became an advocate for conservation and after they themselves committed not to cut down rainforests.

Such business norms works best when leading global companies take the initiative. Last year, China was ranked by Forbes as home to the three biggest public companies in the world and five of the top 10. The OECD and China are now working on moving towards common standards for businesses. More global guidelines would make a huge difference because China now provides 1 out of every 5 dollars invested in Africa. Chinese companies are building important infrastructure around the world like the East African railroad linking Kenya with Uganda, Rwanda and South Sudan. Chinese companies are increasingly moving manufacturing plants to Ethiopia and Rwanda.

More and better private investment is necessary to eradicate poverty and provide food, electricity and jobs for a future 9 billion people without destroying the planet. More responsible business conduct is a hugely important part of that.

The Global Forum on Responsible Business Conduct 18-19 June 2015 is held to strengthen international dialogue on responsible business conduct (RBC) and provide a ‌‌‌platform to exchange views on how to do well while doing no harm in an effort to contribute to sustainable development and enduring social progress.